You are here: Home1 / News2 / Biogas3 / FirmGreen Targets 2012 to Produce Fuel from Trash at Novo Gramacho

FirmGreen, Inc. (FirmGreen®) a technology leader in the renewable energy field, has prepared its final shipment of proprietary biogas cleaning equipment for export to Brazil, setting the stage for the installation phase of the project that will produce fuel from trash.

California-based FirmGreen exports the final shipment of its proprietary biogas cleaning equipment to Rio De Janiero, that will be used to turn dirty landfill gas into clean, renewable biomethane fuel.

The Brazilian based project sponsor is Gás Verde, SA and the completed plant will clean biogas from the nearby Novo Gramacho landfill for sale to a local oil refinery owned and operated by Petrobras, the largest company in Latin America and the eighth largest energy company in the world.

The final shipment of FirmGreen equipment, mostly manufactured at Guild Associates in Dublin, Ohio, and shipped in installments over the past 11 months, has been loaded onto 16 trucks and is enroute to the Port of Jacksonville, Florida, where it will be shipped to the Port of Rio de Janeiro.  Upon arrival in Brazil by late May, the equipment will be transported to the Gás Verde biogas purification plant at the Novo Gramacho landfill for assembly.

By late 2012, FirmGreen expects to begin operation of its patented CO₂ wash process at the Gás Verde facility to convert landfill gas into clean, biomethane fuel, with an energy content equivalent to natural gas.  Gás Verde will then inject the clean biogas, sold under FirmGreen’s trademark of gCNG®, into a pipeline 3.7 miles long to the local Petrobras refinery. Petrobras plans to use the gCNG to generate over 10 percent of the thermal energy needed to run its Duque de Caxias Refinery.

“The delivery of our fourth and last shipment is a huge milestone for the project,” explained Steve Wilburn, FirmGreen’s CEO. “Within months, the Gás Verde project in Brazil will use FirmGreen technology to convert landfill gas to pipeline quality natural gas. The completed facility will not only reduce greenhouse gas emissions by 1.4 million metric tons a year, but it will set the standard as the technology to replicate at landfills worldwide, thus positioning FirmGreen’s U.S. based manufacturers to once again become the leading exporters of green technology. FirmGreen is proud to be at the forefront of this effort.” 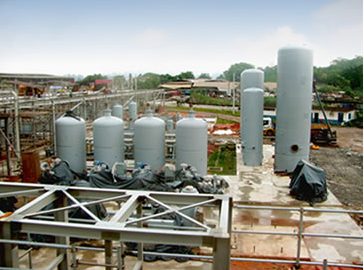 Once the plant is in full operation, the Gás Verde project in Brazil will use the FirmGreen technology to clean 12,000 scfm (standard cubic feet per minute) of landfill gas into usable, pipeline gas.   The EPA estimates that such emission reductions are equal to the annual greenhouse gas emissions from removing 278,400 passenger vehicles from the road and/or reducing the CO₂ emissions from 159.6 million gallons of gasoline consumed.

In addition to its environmental benefits, Wilburn noted that export of FirmGreen’s green technology to produce fuel from trash has created hundreds of skilled U.S. jobs and helps improve the nation’s trade balance at a time when the American economy has been challenged.  Manufacturing operations in seven different states contracted with FirmGreen on this project, each contributing a significant role in the fabrication of FirmGreen’s biogas purification equipment.

The undertaking has also created hundreds of jobs in Brazil.

“This is what truly makes this project a win-win,” explained Sergio Stacchini, President of Gás Verde. “We are dramatically reducing landfill emission, producing a cleaner, better product and improving the socio-economic status of the Gramacho area by creating jobs.  It doesn’t get better than this.”

Because these cookies are strictly necessary to deliver the website, refusing them will have impact how our site functions. You always can block or delete cookies by changing your browser settings and force blocking all cookies on this website. But this will always prompt you to accept/refuse cookies when revisiting our site.