Go green and gain control of your fuel costs with gCNG®

gCNG® — a Renewable Fuel from Biogas

Renewable fuels such as FirmGreen’s gCNG® offer a clean and economical alternative to fossil based fuels, derived from reliable, sustainable local resources.

For a typical fleet fueling operation, FirmGreen technology is used to process landfill gas into ultra-pure biomethane, which can be compressed on-site for fueling CNG vehicles. Both time fill and fast fill dispensers can be installed to serve your fleet needs.

Rather than burn gasoline or diesel fuel, a consumer would fuel their vehicle with natural gas. In order to provide enough range, the gas is compressed and stored on the vehicle in pressurized tanks. Tanks that can hold up to 3,600 psig.

Sounds a little scary doesn’t it? Not when you compare the physical properties of Natural Gas and gasoline. The fact is that natural gas is a much safer fuel than gasoline. Natural gas readily disperses in air because of its simple molecular structure. (Ever wonder why the stove in your home doesn’t burn gasoline instead of natural gas?) Just take a look at the chart below and those on following tabs for some interesting facts:

A typical configuration consists of a pre-treatment skid, the biogas cleaning module, and optional polishing modules to condition the gas for specific applications. The system’s compact footprint makes it suitable for locations with limited land available to site a project. 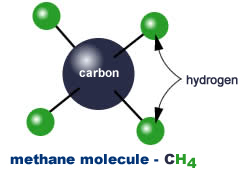 As you can see from the chart, natural gas has a ratio of four (4) hydrogen atoms to one (1) carbon atom. This makes CNG the lowest carbon fuel available today: with the exception of hydrogen itself, natural gas (NG) has the highest hydrogen content of any fuel.

Why Petroleum is More Polluting 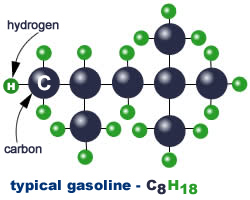 The second chart at left shows the molecular structure typical of gasoline – you can see that it’s much more complex than the simple structure of methane (natural gas) shown above at left . You’ll notice that there are eight (8) carbon atoms and eighteen (18) hydrogen atoms in each molecule. Because of the complexity of the molecule, gasoline tends not to completely combust in an engine.

When a hydrocarbon fuel (that is one that’s made of a combination of hydrogen and carbon) burns completely, the oxygen in our air combines with the hydrogen to form water (H2O) and with the carbon to form carbon dioxide (CO2). If the combustion is not complete, then some of the carbon atoms only combine with one oxygen instead of two, and form carbon monoxide (CO) as a result – a poisonous gas that is lethal to humans if concentrated.

The third chart below shows the very complex molecule structure typical of diesel. There are sixteen (16) carbon molecules and thirty-four (34) hydrogens. The ratio of carbon to hydrogen is nearly double to the ratio of carbon to hydrogen found in methane (CNG). Because of its complex structure, diesel fuel does not completely combust in an engine.

Along with carbon monoxide pollution resulting from incomplete combustion, other carbon atoms may remain stuck together with each other and with some of the hydrogen atoms also; these unburned hydrocarbon molecules come out of the tailpipe. The unburned hydrocarbons then react with nitrogen oxides (another pollutant from combustion) in the presence of sunlight to form ozone, which is a lung irritant.

FACT: high level ozone in the stratosphere is a shield against the sun’s ultraviolet light, but ground level ozone is the main component of “smog”. Carbon atoms can also remain stuck to one another with few or no hydrogen atoms attached, especially during incomplete combustion of diesel fuel, producing soot. Soot has been linked to a significant increase in respiratory illness in school age children. Find out more about health risks of diesel from the EPA:
http://www.epa.gov/mobile-source-pollution/ (link opens in new window)

Because alternative fuels such as CNG have simpler molecules, they burn more completely in an engine, so that less carbon monoxide, soot, and unburned hydrocarbons come out the tailpipe. Methane, or natural gas, in particular is almost incapable of forming smog. These are reasons that CNG is much less polluting than gasoline and diesel.

How is Compressed Natural Gas (CNG) used for powering vehicles?

This is accomplished by the following steps:

Natural Gas an ideal fuel source for many reasons, including safety.

Natural Gas is lighter than air. This means that it will not puddle (like gasoline) or sink to the ground like propane, which is heavier than air. Instead, Natural Gas will rise and dissipate in the atmosphere.

Natural gas also has a higher ignition temperature. This means that it is much harder to ignite. Also the storage systems used for compressed natural gas are infinitely stronger that the gasoline tanks found on cars and trucks today.

Contact us today for an evaluation of your biogas resource.

Because these cookies are strictly necessary to deliver the website, refuseing them will have impact how our site functions. You always can block or delete cookies by changing your browser settings and force blocking all cookies on this website. But this will always prompt you to accept/refuse cookies when revisiting our site.